Seeing as how we’re into our third week of new classes, I thought I’d share a bit about what they’re like. Instead of the Spanish Intensive of the first term, which was focused on preparing us for our upcoming classes in other subjects (and, you know, a semester entirely in a Spanish-speaking country), these new classes are taught entirely in Spanish, but on other subjects. Twice a week I have Literature, which is by far my biggest class here at an astonishing eleven people. On the days I don’t have Literature, I have a Sociology class with four other students. Overall, I’m in class fewer hours than in the first term, but most of that extra time goes to all the reading we have.

Our literature class is taught by Giovanna, the PLU professor who’s accompanying us in Oaxaca this semester, and it’s addressing the theme of violence in Mexico through the genre of “testimonio.” Recently we’ve been talking about how the genre is not just about educating people but also promoting action as a result of that education. In other words, the point is not to read it and say, “wow, that was a really well-written account of some really horrible events,” but rather to open one’s eyes to such events and take action for justice. It’s a pretty heavy class considering the theme and the genre, but it is also a unique opportunity to be studying literature in the country about which it was written.

Likewise, our sociology class pertains directly to Mexico, and Oaxaca in particular. We started out studying the family structure, changes in that structure, and the effects of migration within the family. It really gives me a lot to think about, and it is particularly relevant here, as we are each living with different host families, and that has been a topic of discussion in our group since the beginning of the trip.

Yesterday we had the unique opportunity to take a field trip during our class to El Pedregal, an organization outside of Oaxaca that deals with sustainability and water conservation. Our guide was a German biologist who was living in Oaxaca and had excellent Spanish and English, so our tour was in Spanish, but he was able to explain some of the unfamiliar vocabulary related to permaculture and conservation in English if needed. He defined permaculture as the coexistence between people and nature that benefits both parties equally, which I thought was a good way to put it (it sounded even better in Spanish).

We toured the facilities, which included botanical gardens, water storage and conservation, dry toilets (which are super cool!), a bamboo house that’s currently under construction, bee habitats, compost plots, and a windmill that provides sufficient energy for the project. It was pretty interesting to hear about the uses of each aspect and how they all worked together as a system to make the best use of all of the materials at their disposal without letting anything go to waste.

It might seem a bit strange that a sociology class currently in the middle of studying family structure and migration would take a trip to visit a site such as El Pedregal. However, as we discovered in class, it actually has quite a lot to do with family in Oaxaca. As Tamara, our teacher, explained, many indigenous women who live in remote pueblos around Oaxaca are responsible for many jobs involving the natural resources available- water, agriculture, etc. As a result, climate change and conservation efforts affect these women and their families quite a bit.

We’ve also had a few other excursions recently, including a tour with Fundación En Vía, an organization in Oaxaca that gives micro loans to women who own businesses in some of the pueblos outside of Oaxaca. They do some really neat work in the way they structure their program, and in doing a tour with them, we had the chance to meet some of the women who work with En Vía in the pueblos of Santo Domingo del Valle and Santo Domingo Tomaltepec. A few of them had worked with the organization for some time, and they were clearly proud of the changes they had made in their business with the money. The women had all different businesses: weaving, leatherwork,Tupperware, beauty products, tortillas, or even a “comedor,” which is a small, simple restaurant often run from someone’s home.

Several of the women we met were weavers, and used the loan to buy yarn in bulk, which is a cheaper way to obtain materials that they’re always going to need for their business. Sofía, pictured with her granddaughter Elena, below, showed us how much yarn she was able to buy with the money from En Vía. Enough for Elena to enjoy playing in, that’s for sure! Another of the women we met, Teresa, makes tortillas and tlyaudas, and she showed us the process. Then, she gave us the opportunity to try just the final part of putting them on the cooking surface; it was a lot harder than it looked. Several of us tried, but the tortillas always seemed to end up with tears or wrinkles or, in one case, scrunched into a ball.

To end the day in the pueblos, we ate in the “comedor” of a woman named Sylvia, who explained to us how she had used her loans to buy tables, chairs, and other materials to make better use of her space and expand her business. We also ate Tlayudas there, which are quickly becoming my favorite food here. They’re basically a large tortilla (the kind Teresa makes) folded in half and filled with beans, lettuce, tomato, avocado, and a mild white cheese called quesillo, which is found on just about everything here.

After eating, we headed back to the city and had the chance to talk to our guides a bit about some of the other work of the program, which includes education in several different areas such as business skills, computer skills, and English. One of the women we met, Francisca, showed us the business cards that she had made and printed with the help of the program. Overall, it’s a very neat organization, and if you’d like to know more about them, definitely check out their web page here

Also, if you want to know more about El Pedregal, you can find their website here

Photos from top:
The group at El Pedregal; an example of a dry toilet; a view of the main house at El Pedregal; Sofía, her workshop and her granddaughter, Elena playing in the yarn; The workshop of Juana, another of the weavers. 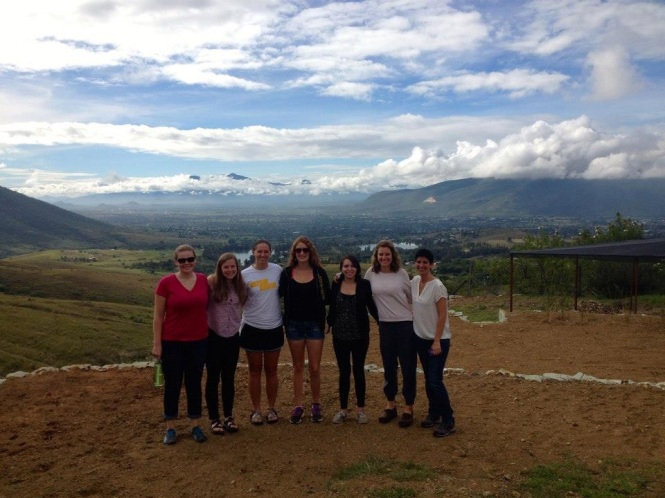 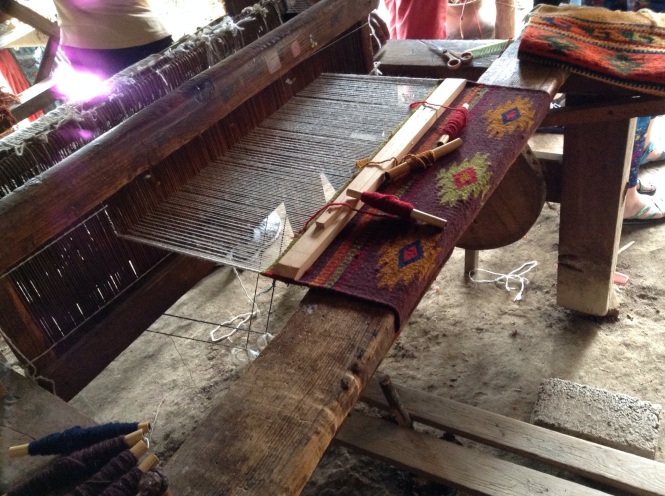 One thought on “Term II Classes and Excursions!”